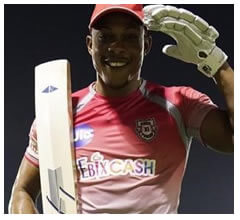 Sheldon is a West Indian cricketer, who plays his part in all the major franchise tournaments around world including the IPL and CPL. An opening bowler, with the ability to swing the ball, he can be a real menace for the top order. Sheldon made his International debut against India in 2013 and since then has picked up 87 wickets across all three formats.

Nowadays, more renowned for his white ball bowling, he holds an impressive t20i bowling average of 20 and is a key part of the West Indies ODI set up, making 9 appearances at the 2019 World Cup and collecting 12 wickets overall, with best figures of 4-56 against New Zealand.